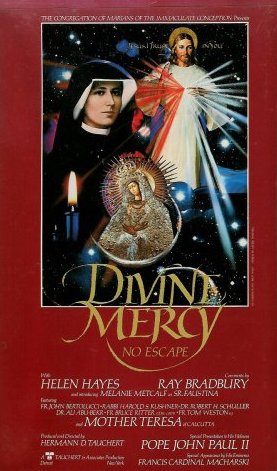 The Congregation of Marians of the Immaculate Conception have been promoting devotion to Divine Mercy since 1941. They promoted St. Faustina’s messages from 1941-1959, but then a ban was put on them by the Vatican because of faulty translations and the inability to access the original Diary at the time. Thanks to the work of Archbishop Karol Wojtyla, the objections were resolved and the ban was lifted in 1978, six months before he would become Pope John Paul II.

Once again able to talk about Sister Faustina, the Marians worked to edit her Diary in the original Polish and then produce an English translation. They knew a film should be made about her life and the message of Divine Mercy. This was done in 1987. The film, Divine Mercy No Escape, premiered on September 15, 1987 at Grauman’s Chinese Theater in Hollywood. There was a good reason for this. At the time, Pope John Paul II was making a papal visit to the United States and meeting with various groups. One of the groups was all of the bishops of the United States. He met with them in Los Angeles on September 16 at the Minor Seminary of Our Lady of the Angels. The day before, the Marians took the opportunity to invite the bishops to the premiere. All together, 67 of the bishops were able to attend, along with several hundred people who were benefactors of the film.

This is all well and good, but it is now 27 1/2 years later. That was the first and last showing of Divine Mercy No Escape in Hollywood.

Now, I’ve been given the opportunity to have a small showing of the original film at Family Theater Productions, Sunset Blvd. Hollywood. You may know of this place as the result of Fr. Patrick Peyton’s work to promote Family Prayer, and in particular to enlist the help of people in Hollywood for this cause. Many radio and television programs have been produced there over the years.

I’m showing the movie as an example, with all the aspects that work, and attention also to things that don’t work or have become dated. The movie is very much a product of its age. It does introduce people to St. Faustina and the Divine Mercy message, but also tries to show mercy in action through examples from its time. The movie has a certain effectiveness, and certain scenes are still quite powerful, but some parts can be seen as a bit “quaint” by today’s standards.

I want to show the movie primarily to Catholics that live and work in the Hollywood area to show both goals to shoot for and pitfalls to avoid. Perhaps the movie has a message for them–something unexpected. The point of the movie is spiritual enrichment, but it can also help foster new ideas to promote spiritual enrichment among those who work in media.

The screening is on January 27, 2015. There will be social time at 6 PM with light fare and the movie will begin at 7 PM. Space is limited. Contact lbilleci@familytheater.org if you are interested.

In general, the promotion of such a thing falls upon consecrated individuals and communities.

Pope Francis is asking religious to “wake up the world.”

I have some ideas, but, you know, it’s really all within the realm of divine providence. In the end, God has to provide the means, but we also have to cooperate.

Note that Jesus gave St. Faustina a very tall order: “My daughter. Speak to the world about My mercy; let all mankind recognize My unfathomable mercy. It is a sign for the end times; after it will come the day of justice. While there is still time, let them have recourse to the fount of My mercy; let them profit from the Blood and Water which gushed forth for them.” (Diary 848)

That call to “speak to the world” is a call that lots of folks have been involved in since St. Faustina received that message. We Marians are involved in that call by publishing her diary in English and Spanish. But it takes helpers to help, intercessors to intercede. We need others to get the message out.

So, the call of Pope Francis to “wake up the world” is a call that Jesus gave St. Faustina. Fortunately, when Jesus gives such a call, He also gives great means, although not necessarily in the timely fashion we would like. But if we are part of the means, we have to do our part. Is Jesus telling you to speak about this message of His Divine Mercy?

I’ve wanted to see the movie for a while, but Holy Week was particularly busy, as was the time around Mercy Sunday, and then there have been other things that have come up.

My main reaction is, “Wow!”

I don’t feel adequate to review the film, but here’s something from an interview with Jon Erwin (director of the film) that sums it up pretty well:

“I believe the film is much more than just a pro-life film. I think it’s a celebration of life. It’s about forgiveness, it’s about love, it’s about knowing who you are, it’s about a lot of different things, and most of all it’s about the power of forgiveness.” – Jon Erwin, 5 Questions With Jon Erwin

Indeed. I think I recommend this about twice as much as I would recommend Bella. This movie does have some dialogue written for a Catholic priest that, I suspect, was not written by a Catholic, but it’s a mild complaint.

Yes, if you can, you should see it. I’m also excited that there will be some scenes in the DVD that were cut from the film, per the above referenced interview.

I also note that one of the executive producers, Dave Allen Johnson, was the creator of Sue Thomas FBEye. I’ve been rather impressed with his work over the years. I’m glad he was part of this success.

My Review of October Baby in IMDB

I must admit that I haven’t been updating the blog much. I should note that I am now teaching a night class at Franciscan University of Steubenville – Christian Moral Principles. It involves trying to give a broad survey of material that I had over the course of at least 4 semester classes, but by no means are we going into the detail that I had at Dominican House of Studies.

I noticed that one of our seminarians, Br. Angelo Casimiro, has written up his vocation story. It’s always inspiring to read one of these:
Br. Angelo’s Story

The Divine Mercy Novena can be found on our www.thedivinemercy.org website:

Of course, that can be done every day at 3 PM Eastern Time since there are many of us on camera during the chaplet, but on Mondays at 2:30 PM Eastern there is a new “Cenacle of Divine Mercy” series also.

Some information in this video:

Over the years, there have been some important videos produced about the Divine Mercy Message and Devotion. One recent video (March, 2007) that is quite well done is

the latest version of Tell All Souls About My Mercy. Older versions have been simply a recording of the live presentation of Dave and Joan Maroney, but this is actually a video, with numerous sources, that is based on the presentation.  It introduces the viewer to the life of St. Faustina and elements of the Divine Mercy devotion, along with some important passages from her Diary.

I strongly recommend this newest version of Tell All Souls About My Mercy, especially to people who don’t know much about the message and would like to learn more.  The Time for Mercy video is badly outdated, and this helps as an “update.”