As we return to normal (or not) during this time, I have to note that livestreaming among Catholics has increased exponentially within this year, and we Marians have found the level of interest rather amazing. We are getting lots of first-time visitors here at the National Shrine of The Divine Mercy thanks to livestreaming of Masses, chaplets, etc.

One place that has been doing livestreaming, but not getting all that many viewers, is the internationally known Craig Lodge Family House of Prayer. Perhaps part of the reason is that only 2,467 people like their Facebook page. They have a YouTube channel, but once again, not all that many viewers, and only 290 subscribers.

Yet, if you’ve heard of Mary’s Meals, you have indirectly heard of Craig Lodge.

The people that founded it are the parents of Magnus MacFarlane-Barrow. He founded Mary’s Meals.

It boggles my mind that it is so obscure, but then again, it’s in the middle of nowhere in Scotland.

I’ve never been there, but fellow Marian Fr. Donald Calloway has.

I include a sample of Praise and Worship from their YouTube channel.

and also a short video of a conversion testimony produced by Craig Lodge:

I just read Dion the Wanderer Talks Truth, and I would defeinitely recommend the book.

Here’s a Bookmark episode with an interview with Dion DiMucci.

Occasionally I’ll say what’s “on the turntable.” And today, it’s Dvorak’s Te Deum (a rare 10″ LP version). This is a strong choral piece with a great ending. If you’ve followed my blog, you know I’m a big fan of Antonin Dvorak.

A recent LP find is the “Golden Treasury of Catholic Verse.” The LP includes introductions by Fr. Gilbert Hartke, O.P.

This is one great song. It’s not going to be a big hit. It could be, but listen to the lyrics:

Yesterday is gone.
Tomorrow has not yet come.
We have only today.
Let us begin.

Listen to the entire song:
Danielle Rose – Small Things with Great Love
You can also purchase the song for download.

Yes, one of the astronauts, Ron Garan, is a core team member of LifeTeen. He took Matt’s new CD up this past May on a Shuttle flight–STS-124 Discovery. I saw a picture of it on Matt Maher’s website, but it was in a slideshow, and I couldn’t find a way to get just the picture.

I thought it was cool when I was listening to Matt Maher’s music (Overflow CD) when I was on a train in Rome, but this is about at “out there” as it gets for a musician right now.

I can’t find much of an article about it. Here’s an article saying that it would happen before it did.

In this time of natural disasters, this video is quite appropriate.

“Your Mysterious Ways” from the Catholic rock band Critical Mass:

Lyrics from the song by Stuart Hamblen:

Divine Mercy is not secret, but also not well known.

Steubenville is not always gray and smelly. Today was actually rather sunny and nice. I took a walk in the neighborhood today–something I haven’t done since late last year. Easter Season is off to a good start.

A recent find: A Child’s Garden of Freberg — a Stan Freberg “best of” LP from 1958. His outlandish rendition of “Sh-Boom” is a treat.

Here are some of the albums (from the 1950s, of course) with a particular focus on Our Lady that we have in our collection. 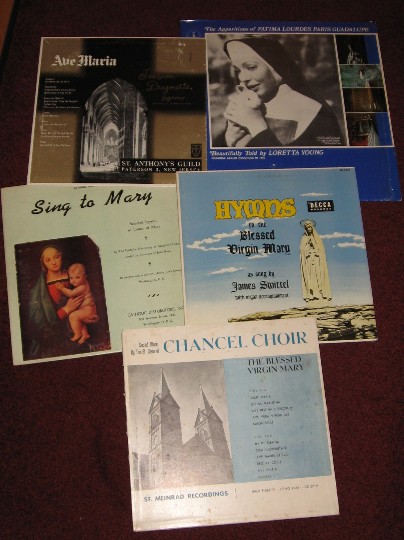 The album with Loretta Young dressed as a nun contains the stories of the apparitions at Lourdes, Fatima, Paris, and Guadalupe. We have the original 78 record set of this at our Chicago House.

Needless to say, these records are ultra-rare. However, they are not very much in demand.

You too can listen to my Last.fm playlist. It’s rather eclectic, but largely Catholic.

Ever hear of Nick Alexander and his parodies?

I think this is one of the better ones: Therese of Lisieux.

Only Nick could have thought up this one.

The 1950s were an amazing time. A song called “Our Lady of Fatima” made the charts–even to the top 10!
There was an article in Time Magazine about the song, which you can read here.

You can listen to Andy Williams sing this song at Last.fm.

The song was released by a number of artists. Here are images of a 45 released by the Mariners–a quartet of two black and two white men who met in the Coast Guard. 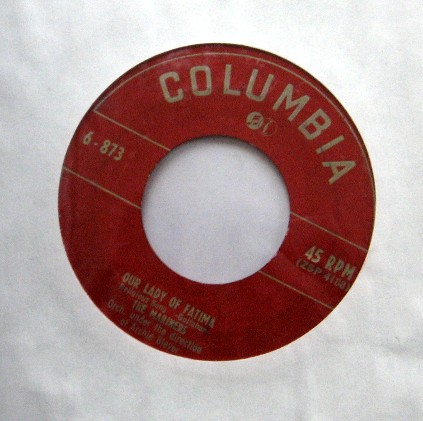 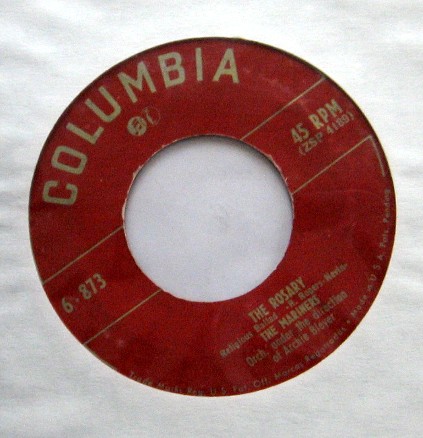 Of course, musicians continue to honor Our Lady with new songs and new arrangements of old songs. Here’s Joe Zelek’s arrangement of the “Hail Mary.”

For an example of new original music, here’s Crispin’s “Regina.”

I was surprised to find a video of a live performance of a Petra song: Hit You Where You Live. This is indeed an important song to me. The lyrics talk about Jesus “hitting” you where you live, i.e. changing your life. I particularly like the lyrics:

It’s always a treat to watch Phil Keaggy play guitar, and this video is no exception. I saw him perform here at the Franciscan University of Steubenville back in 1997.

Since it’s “All Saints”, I thought I would embed a video of a song (in Italian) dedicated to Servant of God Chiara “Luce” Badano. She was born one year after me! (1971) She died in 1990 from cancer at the age of 18. HER CAUSE IS IN PROGRESS!

Talk about a recent example of holiness.