That Emile Berliner really started something with his “gramophone.” Recently I got a “Premium Gramophone,” which is a kit from Japan that allows one to play 78 RPM records in a way very similar to the early days of Berliner’s gramophone, an image of which was used on the RCA label for a long time (now owned by Sony).

78 RPM records help one to understand the history of music, at least for a little over 100 years. There have been lots of trends and shifts in style, but sometimes I think they were more clever in the early days with novel uses of language (an old Jazz piece is called “Celery Stalks at Midnight”). Yes, problems like racism show up in these old discs, but also the value of prayer is prominent, even in some pop tunes. They had their pluses and minuses.

We are more advanced technologically, but our new-fangled forms need electricity. The old gramophone just needs lots of needles and energy from the hand to turn a crank. There’s a certain refreshing “newness” to this liberation from the grid, even if sound quality ain’t all that great. There are definitely things to learn from the old discs and the completely mechanical process of sound reproduction. Sometimes things don’t have to be as complicated as you think they do.

The picture below shows the gramophone playing a Columbia Symphony Series 12 inch record–with a great looking label from the 1910s era. 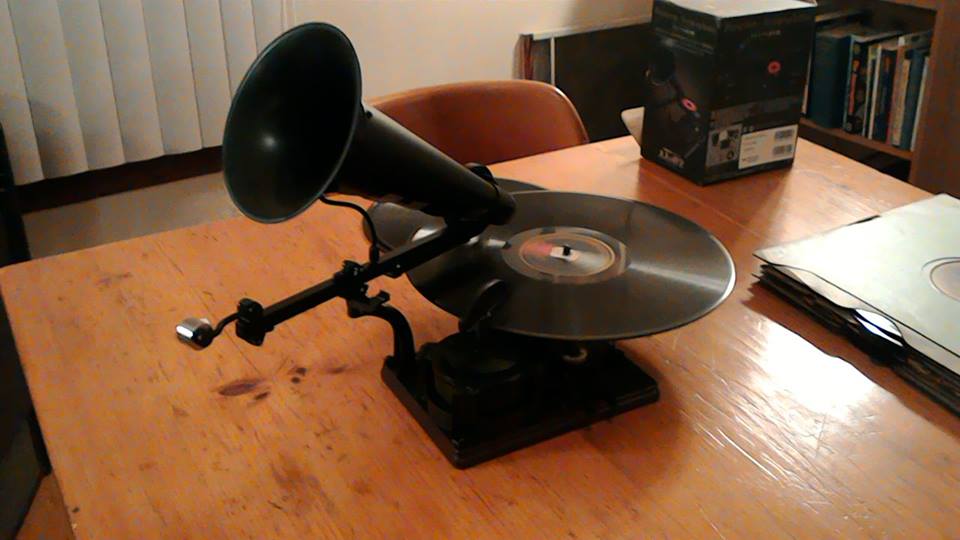 Can it be that this blog is now over 10 years old? Yes… but how could this be?

Ten years ago I was a brother in the Marians and student at the Dominican House of Studies blogging about the soon to-be-released movie The Passion of the Christ. There was a lot of controversy surrounding it even before it was released in theaters.

“The Hour of St. Francis” is a radio program that began in December of 1946 and continued through the 1950s. The program was distributed through syndication. A radio station would receive transcription discs of episodes. Each fifteen minute episode presented a dramatic story — often a “modern day parable” which looked at a moral issue or a particular virtue. “The Hour, sponsored by the Third Order of St. Francis, is founded on the belief that sound Catholic teaching and religious inspiration can be combined with entertainment.” (The Sign, December 1949, p. 31)

It was the project of Fr. Hugh Noonan, O.F.M., of St. Joseph’s Church in Los Angeles. He wanted stories that tackled practical problems of modern men and women.

According to the article in The Sign, the programs were financed on a budget of $22,000 a year, which was a rather small budget for a radio show. A “series” of shows meant 39 or 40, and each year a new “series” was produced. “[The money] is raised through a tax of less than fifty cents a year per member of the Third Order Fraternities, supplemented by contributions of the Franciscans of the First Order and the Franciscan Missionary Union.” (ibid.)

The article also mentions the positive impact the show has had on people. “Letters from listeners tell the story of its value. An alcoholic is lifted from the brink of despair; a Catholic vows never to miss Mass again in his life; a young man bedridden and without religious contacts finds his way into the Church.” (ibid.)

Approximately 400 episodes were produces of the program. A few of these are in circulation among Old Time Radio Collectors.

Some episodes are available through this website, but it requires registration.

Franciscan University of Steubenville, in Steubenville, Ohio, has approximately 28 16″ transcription disks of the radio program, including the entire first series of programs. They have not been transferred to any other media, and there is no player to play them with at the library.

I have a few later episodes on reel to reel tape, and I have transferred some of them to MP3 files. A few of these episodes might be found online, but most are not in circulation.

The copyright to the program is held by the Franciscan Friars of California – Province of St. Barbara. The programs may have fallen into public domain due to a lack of action on the part of the Franciscans, but this is not certain. At present, it seems they have no interest in doing anything with the shows.

The quality of the shows varies, but some are real gems. Perhaps someday they will be available to the public — legally, that is. St. Francis, pray for us.

(Note: Here I only deal with the radio show. The “Hour” became a half-hour TV program in the 1960’s, and its history is also quite obscure. I have not seen any of the episodes of the TV show available anywhere.)

I’m developing an archive of rather obscure Catholic audio files… mainly from LPs and reel to reel tapes of yesteryear. These are things which I presume to be in the public domain or have received permission to post.

You will find something for a variety of ages and tastes there (i.e. lives of saints, radio dramas, etc.). The files are listed newest first, so part 2 is shown above part 1 for programs which have 2 parts.

What do I listen to in terms of Old Time Radio? Ok, maybe you didn’t have that question in mind, but I’ll answer it anyhow:

For comedy: Give me a good ol’ Jack Benny show. It always seems to deliver at least one great laugh. I generally don’t feel it was a complete waste of time to listen to one of these for some comedy. I particularly like the later CBS shows.

Also, Fibber McGee and Molly tend to deliver some good laughs. The show tends to be about “nothing.” Ok, so Fibber has a hair-brained scheme or there’s a misunderstanding that isn’t discovered until the end of the show, but overall, there really isn’t much substance. That’s fine as long as the laughs are there.

I’ll discuss other genres in the future.

I’m describing this blog, of course. It really does lack quality. It also has very few viewers (and for good reason). It has no “hook” that keeps people coming back to see what’s up. Frankly, it’s boring.

Still, that’s no reason for me to stop. I continue to plod along.

In a few moments of spare time, I’m actually playing old Infocom games. Some I never solved, and some I did solve but still would like to revisit after, oh, 20 or so years. TWENTY YEARS?!?! Is it really that long ago? Those were different days when it comes to computer games.